THE NEXT STOP ON THE 3 EGG CREAMS EXPRESS?
NYC’s THE CUTTING ROOM
(See flyer below for all the info!) 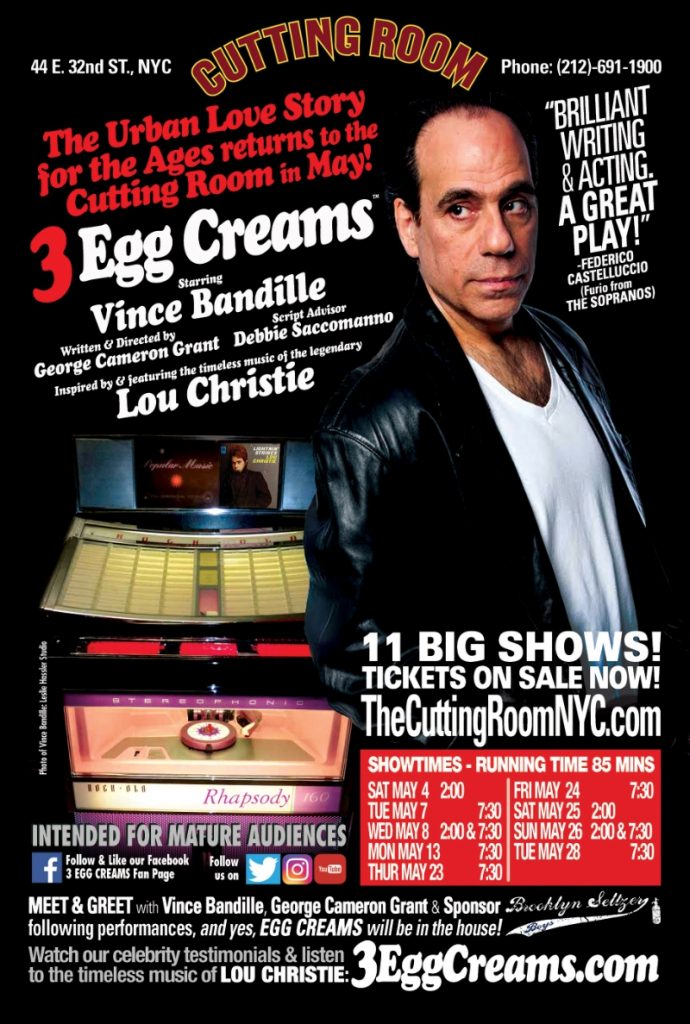 You can find more info by visiting 3 EGG CREAMS

Starring the incredible VINCE BANDILLE as Vin Morrone, it portrays one man’s lessons in life, loss and love, with 1 actor, 5 characters, all in one hour and 3 EGG CREAMS, inspired by and featuring the timeless music of the legendary LOU CHRISTIE!

Whether you grew up on University Avenue in The Bronx, Newark, West Philly, or Cedar Falls, you will recognize the tough, tender, sometimes terrifying, yet ultimately transcendent human journey Vin must take, in an age that is redefining the mythos of the American male, and even the meaning of love itself. Blend in the timeless music of the legendary LOU CHRISTIE, and you have 3 EGG CREAMS, an urban love story for the ages!

What they’re saying about 3 EGG CREAMS:

“I came tonight expecting to see a one-man show, but what I saw was something much more. The writing is amazing, the acting by Vince – I was just gripped for the entire time he was there. I lost myself. I went into his world with him. It’s one of the greatest experiences I’ve had off Broadway. I just recently saw ‘Angels in America’ with Andrew Garfield, and tonight I come to see Vince do this, and it’s the same thing. It’s brilliance!”

“I just saw the play 3 EGG CREAMS. Phenomenal! What a love story! It’s one of the best I’ve seen – you’re going to love it!”

“The only thing that comes to mind after seeing 3 EGG CREAMS is shock. I had no idea what I was in for. I’m 61 years old, and I’m crying like a baby. If you have a chance, see it. I want to see it again myself.”

“I loved 3 EGG CREAMS! It’s so poignant, it made me think, and laugh, and cry, and
I know I saw the best thing in theatre in NY tonight, and I can’t wait until everyone else knows it.”

“Broadway: One night it’s a National Theatre multi-million dollar production at the Neil Simon theatre with Andrew Garfield killing it, and a few nights later it’s an off Broadway MASTERPIECE with Vince Bandille killing it with 2 coats, a chair, a rose, a Santa hat, and an egg cream. The same level. The same experience

“3 EGG CREAMS is the quintessential NY story. It’s about life, and love, it’s about loss, it’s about youth and growing older, and what we do to survive. It’s about what we need from each other. It’s really a fabulous piece that tells all about the Bronx, but it also tells a larger story about what it is to be alive and in love.”