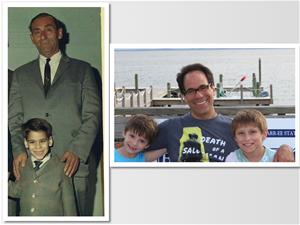 When I was around eleven years old, I got into an argument with a teenager who lived across the street over something to do with stickball. As it got heated, he pushed me and I fell and banged my head. He really didn’t mean for it to happen. I was trying to be tough, he was trying to be tough, stupidity ensued, no biggie… but being eleven, and more embarrassed than bruised, I ran inside and told my mother. My father overheard me tell her about the incident, rose to his feet, and started mumbling something about “taking care” of the situation.

My father was kind of an absentee father. Though he was there, he was never present. If I heard my father say a dozen words up to that point in my life, it would have been a lot. But now, here he was, coming to my defense. He saw his son wronged, and he was going to make it right.  He called me to go with him, and I followed him out. My heart was racing for so many reasons, but mostly because this was so unlike my father. He had never done anything like this… ever! Yet, I was ecstatic. It was as if my father donned a red cape, placed his hands on his hips, and was going to serve up some justice for the boy he loved. As he came out of the apartment building, I sensed something wasn’t quite right. He staggered a little bit. I brushed it off as him slipping on something, but almost immediately, as he confronted the teenager, I heard him slur his words. My father was drunk… more to the point… he was shit-faced. He didn’t know what he was doing, and he’d have no memory of it in the morning. The teenager who pushed me knew my dad was three-sheets to the wind, as well as all the other kids witnessing the event, and I was mortified. In one swift moment, my hopes to see my father be the hero I always wanted him to be were dashed as I was faced with the reality I knew for so many years… my father was an alcoholic. It boggles my mind how, when I think back to that incident, I can recall it so clearly. And though I know my father’s reaction may have been more alcohol-induced; there is a part of me that holds out hope that somewhere inside of him, apart from the alcohol, his intentions were true.

Every son’s first hero is his father. Even before they have any awareness of what a hero is, they intuitively know their father is one. A son has the ability to see beyond his father’s shortcomings and hangs his hopes that his father is secretly out saving the world while he lays sleeping. And most fathers secretly hope their sons see them that way. For a son, their father isn’t just a heroic figure; he’s a mirror into the future. Initially, as little boys, we see him, and wonder if that is what we’ll look like, act like, walk, and talk like. But as little boys turn into questioning teens, they begin to envision the role they might take on themselves in the very near future. It’s not so much about resembling or acting like your father, as much as it becomes about “what does it mean to be a father?”

Now here I am, forty-two years later with two sons of my own, and my perspective has shifted somewhat. Stepping into the role of “dad” has caused me to realize how enormous the responsibility is. In a certain way, I’m now able to look at the world through my father’s eyes. And in doing so, I suddenly understand how imperfect we are. Before having children, I never imagined myself a hero, but now I seem to have taken on the role, albeit reluctantly.

I have not followed in my father’s footsteps when it comes to alcohol, though I did have my bout with drug abuse (I’m twenty-seven years clean.) In being clean and sober long before I was a father, my sons have never witnessed me in any kind of inebriated condition. In fact, they haven’t even seen me buzzed! But here’s the kicker, today I am able to see my father for who he really was… a man filled with fear, unable to face life’s problems head on, and someone who had fallen into the trap of finding a way to numb reality enough so it was bearable. In other words, he was human… a condition shared by the rest of the world’s population. Was he an alcoholic? Yes. Does it sadden me? Yes, but not like it used to. You see… I was given the gift of seeing into my father’s heart just before he died.

When I was fourteen years old, my mother passed away. As devastating as this was, two weeks after, my father sat me down to tell me he could no longer take care of me, and he had worked it out for me to choose between two of my relatives as to where I’d live. I submissively accepted my fate. Fast forward eighteen years later, and the moment came where I confronted him about why it was he chose to have someone else raise me, and had not taken on the responsibility himself. As he sat helplessly on the couch, looking up at his son standing over him venting all this bottled up anger, yelling, “Why didn’t you take care of me? You were my father? Why didn’t you take care of me?” he answered with a trembling voice, simply saying, “I didn’t know how.” Those words were like a punch to my chest. Those words were as real as the tears rolling down my father’s face as his spoke them. Those words still reverberate in my soul to this very day. It may not have been the answer I wanted, but it was the most honest answer he could have given. And I saw right then and there, he knew himself well enough all those years ago to know he could never give me the life I deserved. He saw his son wronged, and he was going to make it right. He donned the red cape, and placed his hands on his hips, and saved me. I didn’t know it… it wasn’t what I thought saving me would have looked like… but my father knew who he was, and who he was would have never been good for me, and so he saved me from himself. If ever there was an act of heroism, this was it.

Right now, to my boys (who are ten, and six,) there isn’t a superhero alive that could hold a candle to me. They both see beyond my shortcomings, and imagine me out saving the world while they sleep. But there is a time coming, and very soon, where they will discover their father’s kryptonite. I will then become human to them. They will become aware of my weaknesses, my faults, and my inadequacies. They won’t like it because it dismantles the hero they’ve grown to love and trust. They won’t like it because it will be a reflection of their own humanity. They will momentarily lose faith in heroes, as they will not yet grasp the deeper truth of what real heroism is.  Will it turn out better for us than what took place between me and my father? All signs point to the probability that it will, but the greater truth is, there are no guarantees. We are all burdened in some way, and though we want to move all obstacles between ourselves and the one’s we love out the way fast enough so we never do them harm, that’s just not possible. The oddity of it all is that this is the soil where true love can grow, when we are no longer deluded by the fantasy of perfectionism. I look forward to that time. Until then, I will remain the reluctant hero, and cherish this short-lived phase where I’m seen as one who can do no wrong. In a way, a part of me still believes this about my father. In fact, I think all sons do, no matter their age.

My words here are many… but Bruce puts the father and son relationship very succinctly in one of my favorite songs of his “Walk Like A Man.” I can’t think of a better way to wrap up this blog. And as always, I look forward to hearing your thoughts, feelings, and reactions… especially from fathers and sons. All the best!

October 26, 2012
PrevPreviousAs A Man Thinks In His Heart So Is He
NextThe Power In Not Knowing – (Where Actors Find Great Freedom)Next
Menu
Copyright 2022 Vince Bandille – All Rights Reserved  |  Website powered by ActorWebs.com®